Definition
The trace of an $n \times n$ square matrix $A$ is the sum of the diagonal components of the matrix,

Let $B$ be a squared matrix defined as

Using the rule of matrix product, we have 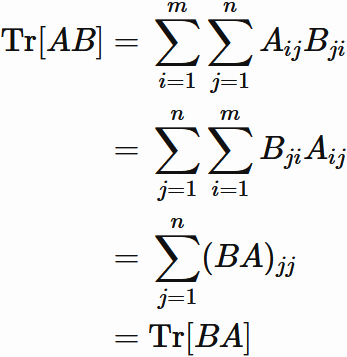 Cyclic property
Let $A$, $B$, $C$ be $m\times n$, $n \times l$, $l \times m$ matrix, respectively. The trace of the product of three matrices is invariant even if the order of the products is cyclically changed:

In other words, the trace is invariant under cyclic permutations

Linearity
Let $A$ and $B$ be square matrices and $\alpha$ and $\beta$ be scalars. The trace is linear:

Proof
By the definition of trace, we see that